When I finally decided I would go out last night and meet some Couchsurfers across town, the rain started to pour.

I was only slightly soggy when I stepped onto the metro.

Plans shifted, so I found myself walking a familiar sidewalk into Poblado.  I met Henry [the “Couchsurfing?” Colombian amigo from the other night] and his friend Diana, also from Medellín.

My first non-taxi car experience…was awesome. Instead of ever present worry or mounting frustration, Diana demonstrated that driving is fun here. It’s pedal punchy, sure, but at the same time, you just do what you’re going to do and everyone else will get out of the way. That’s the overarching mindset. Radio DJing, Henry had us backseat dancing the whole way to Envigado, the southern part of Medellín. Google Maps led the way to our meet point: an obscure corner restaurant, Brasarepa.

Featured in Anthony Bourdain’s No Reservations, Colombia series, Brasarepa beckoned. Start the timestamp at 17:46 to learn all about Medellín or begin at 30:00 to learn about Brasarepa.

Six people joined us and we pulled two tables together to seat the lot of us. I sat at the corner, between Henry and Diana, so I spoke Spanish. They both speak English too so it was fun to mix it up. The crew that joined us was from a local language school…with people hailing from all over the world and the country. We ordered lots of food and felt pretty sorry for the single chef working in the kitchen. I ate an arepa the size of a salad plate and as thick as my fist that was STUFFED to the brim with shredded beef. Wow.

The evening continued to a rooftop gathering, cheersing beers and gazing out at the sea of dulled yellow city lights. Two Colombians, Julie, and a Frenchman on the roof, speaking spanish and french, laughing comfortably in tank tops and flip flops until 1 in the morning.

Rookie mistake. Halfway through my first delicious bite –> the not so subtle discovery of seed tooth crush potential once again. Guayaba 1 – Julie 0.

De-seeded. Guayaba for the win! [Thanks Binny for your recommendation!]

Deep exhale from across the table.

“I just got Colombia’d.” -Blake

…Probably because he ate an arepa de chocolo and then two empanadas and washed it down with fresh squeezed tangerine juice: jugo de mandarina. 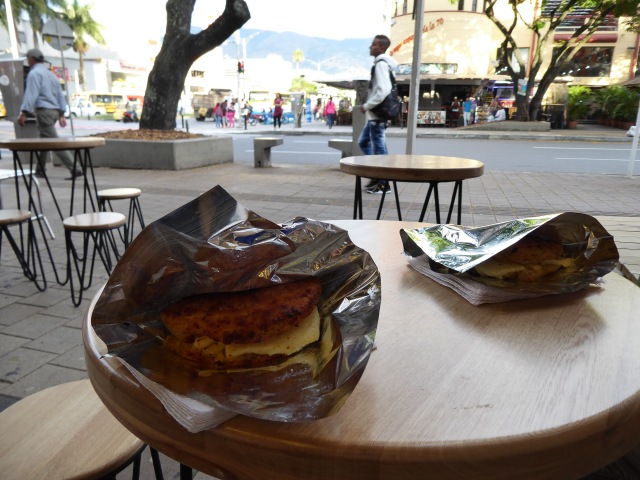 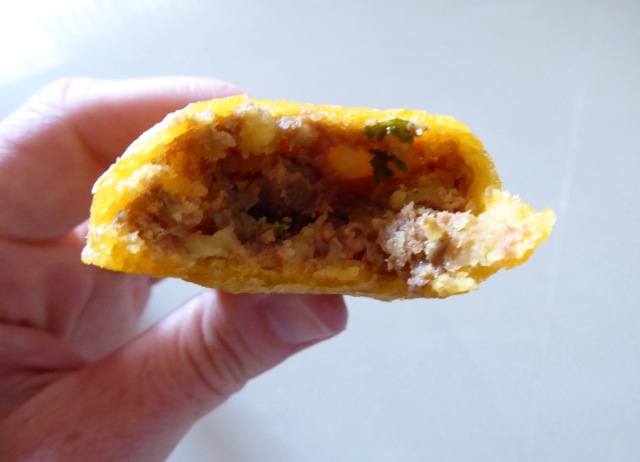 Tonight we attempted to attend another intercambio on the other side of the neighborhood. Key word: attempted.

Upon arrival we sat down with a beer and asked about the intercambio. The gal who served us the beers smiled and told us that people showing up for the exchange is really hit or miss.

Just as we finished our beers, an Australian dude who works at the hostel asked us if we were going to stick around for the intercambio that started at 8pm…

“Well, that’s actually why we’re here. But no one else is here, and we have plans with some friends soon, so we’re going to roll. We thought it started at 6pm. It starts at 8pm?” -Blake

“Huh, that’s weird. Where’d you hear that it started at 6pm?” -Australian dude

“Right there on the wall, on that poster.” -Julie [points to poster 10 feet away]

“Oh shoot. That’s so old. That’s our poster from last year. I guess I should fix that.” -Australian dude

It was truly a faux intercambio.

The ¿highlight / lowlight? of the journey to the intercambio was on the way there. We’ve been over to this hostel in Floresta before and after reading some articles about local history I realized we had walked within a block of the rooftop where Pablo Escobar was killed.

This time on our way there we detoured one block to see the infamous rooftop. Blake took a photo. Eerie. 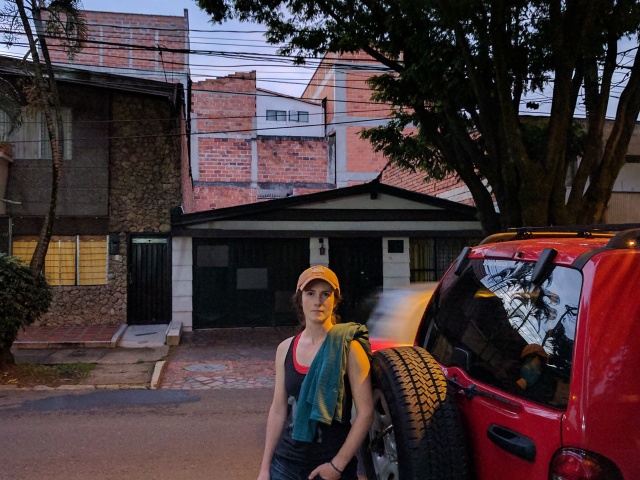 The real highlight of the evening was our apartment dance party and pizza social with three Colombian friends, Henry, Diana, and Tatiana. Bottle of wine, a bowl of faux Fritos, and this epic Spotify fusion playlist and we were set.

Nobody down here has ever heard of fusion or blues dancing, so to explain we simply said,

We danced fusion, sliding around the apartment floor in our socks, and finally checked out the pizza place on the corner, which just so happened to have a special two for one deal. We shared 4 personal pizzas and paid a whopping total of $9 USD.

Our three friends were singing along to all of the Top40 tunes playing at the restaurant, many of which would be quite suitable for fusion dancing. They knew the words to every song. We didn’t even know half of the songs. Reverse culture shock.

This entry was posted in Colombia. Bookmark the permalink.