Pasteles de guayaba are my favorite! Really, I ate four of them this morning. And in US Dollars, they cost like 30 cents each. Seriously, BOCA HOLE. 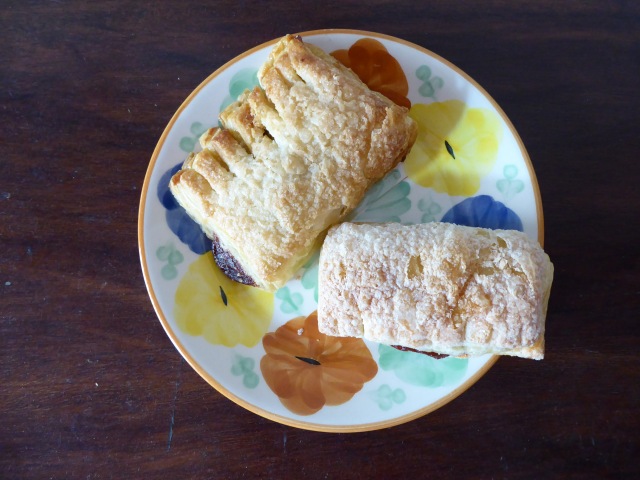 “Boca Hole” is a term, circa 2009, that Julie and Blago created when referring to delicious food or epic quantities of food.

Essentially, when the term “Boca Hole” is employed in a sentence or in a conversation, it means:

“¡¡¡I want to eat that yummy thing, right now, quickly!!! ¡¡¡My level of excitement / hunger / stoke is so high, therefore I must loudly announce my epic level of hungerstoke, because, YUM!!!”

Carried on the Boca Hole train when I saw a man selling these tiny green fruits on the street corner. I must try them.

Henceforth we have the awesomely weird fruit of the day: Mamoncillo

It’s sweet and slightly fruity like lychee. The challenge is sucking / tooth scraping the fruit off of the inner pit. Delicious, but overall challenging to eat. I’m definitely burning more calories in my effort to eat this tiny ping pong ball of Yum compared to the nutrition it provides as a fruit.

Mamoncillo is not for everyone. It’s texture and color could both be classified as wEiRd. To be honest, it’s kind of like a marble sized ball of phlegm in your mouth. Suerte if you ever try it!

Fun fact: the pit that is inside the fruitball has many uses by many different cultures here. Toasting it, grinding it up as a flour, brewing it into beer…all great ideas. I spat the pit.

Pastel de Pollo is our collective favorite. It’s versatility, price, size, and the satisfaction it guarantees…it’s the obvious daily choice.

Why would I eat anything other than pasteles for breakfast? Essentially a hot pocket, but no cheese. Potatoes and shredded chicken and spices and other yummies….all stuffed into a hand held corn patty. Amazing.

Come to our hostel! Buy drinks at our bar! Guaranteed gringos and parceros and LOUD music. Come spend an evening yelling at each other!

Maybe a little harsh. It was fun after all.

After 10 minutes of no eye contact with anyone except for Blake, [I was actively trying!], we said to each other,

“Ok. Five more minutes. Let’s see if anyone comes in that looks like they actively want to engage in a language exchange as opposed to heading straight for the bar.”

Right as Blake was saying,

And so we met José Pablo and his friend. The conversation began with the blunt question,

We all agreed that organized language exchanges, “intercambios,” are easier and more fun when facilitated. We attempted to facilitate our own by speaking Spanish to them while they spoke English to us. Entertaining. Five more people joined us around the awkwardly tall table….my chin could nearly rest on it’s edge from my seated position on the couch. We spoke about our jobs, what we like to do for fun, and just when I thought the conversation was going to jump to something interesting about Colombia, it jumped straight to Donald Trump. A conversation pursued.

Big learnings of the night:

The common descriptive words for “cool” and “awesome” are “chevere” and “bacano“. I use “chevere” frequently already, so I’m on the right track. I hadn’t heard “bacan” since my time in Chile.

This entry was posted in Colombia. Bookmark the permalink.