DAY THREE GOAL: be home (to Gary’s house) by the end of the day, in a bed, after a hot shower.

Well, the two things I prayed for last night were 1. obvious cairns and a reliable route over the pass and down the other side, and 2. clarity (clear skies)….so that I will be able to see the route and said cairns.

The one thing I didn’t pray for was FRESH SNOW. Oh, fresh snow? Isn’t everyone in California on their knees praying to every god on the planet for FRESH SNOW? Well, I’ve some to share. 3 inches in fact. On my tent. Insulating me.

Post snow knock off tent shot. When I went to sleep, all of these rocks were visible. I’m ready to slip and slide! Wahoooooo!

That, thar, over yonder, that’s the pass. Voy! 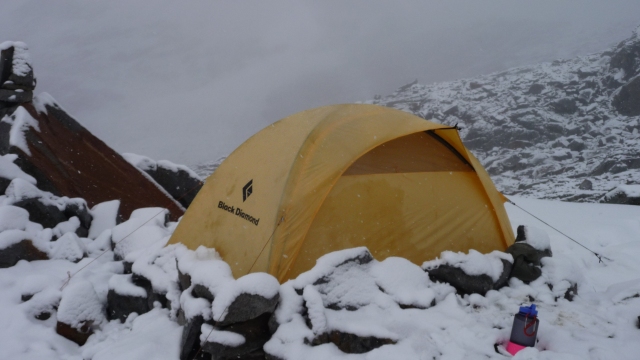 Couldn’t really see a damn thing. Grey, with a bit of white and a bit of black. I’ll take what I can get! 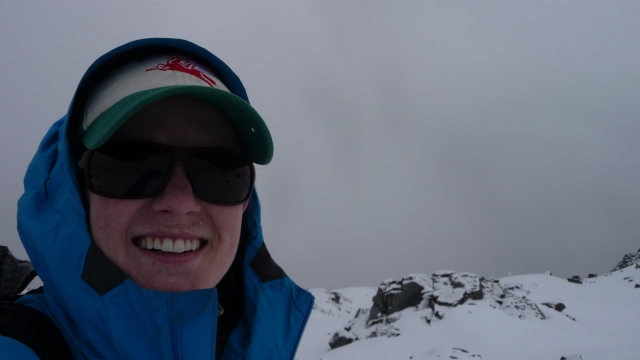 Big thanks, BIG THANKS, to my uncle mark for fixing my gaiters. They proved crucial coming over the pass.

Cool that I couldn’t really see where I was going…or into what Quebrada I was entering. But, down is down. And postholing in snow is postholing in snow. Obvious cairns, and maybe 2 day old footprints proved for a successful descent into the Quebrada Cojup. 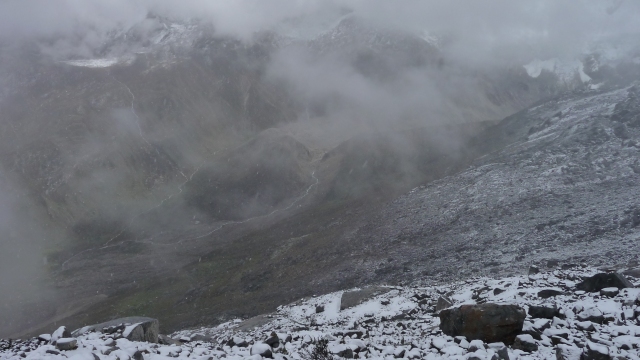 Not much to say except that I passed some territorial cows who got a little fiesty. Moo You! There was a hefty river crossing at the base of the Quebrada, and to stay dry I stripped down to my undies and sans shoes, crossed the rio. High water. An angry cow. A fast crossing. Even faster when the cow started to cross after me.

Lots of rain, and after a while I was rock hopping across a saturated section of meadow and slipped (standard), and proceeded to have wet foot syndrome. Not so bad, as I’m maybe an hour from the entrance of the Quebrada.

Cool bird! Bird friends — who is this? Tell me! 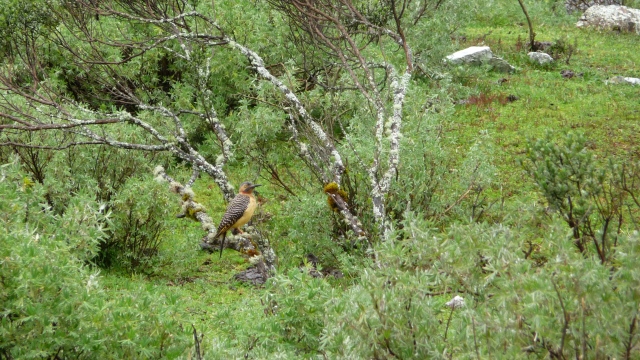 The trail went catywompas and after a while I wasn’t on it anymore.

Ah ha! There! In the distance! Orange! Red! Neon green! Those aren’t wildflowers! Those are raincoats! PEOPLE! The trail! Great Success!

And so I headed to the left, towards the trail, to a bridge that crosses the river. There were three groups of 6 men, carrying generators on their shoulders (yes, DCC friends, the red generators in the scary generator shack…those!) The generators were perched on logs, perched on their shoulders. And no, no raincoats. Ponchos. Whipping around in the breeze. Quite a sight. Heavy, hard work.

I made it to the entrance of the Quebrada Cojup, and just as I had entered the other Quebrada a few days back (by climbing over a rock wall), I climbed over an 8 foot tall locked wooden gate…to get out back into the ‘real’ world. 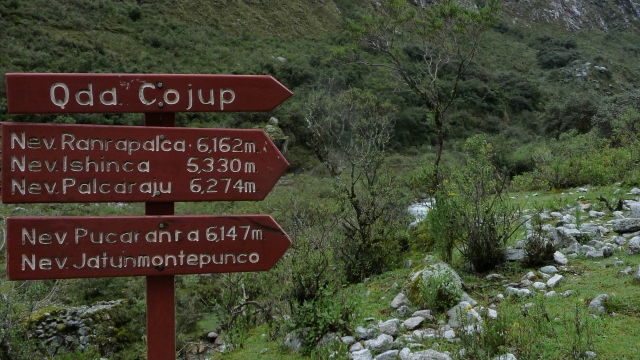 Unfortunately, or fortunately (your call), the story doesn’t end there. Goal: walk down the mountain to Gary’s house. He said it shouldn’t take more than 2 hours. It’s 3pm. Perfect. He also said go right. I did.

Well, with pouring rain and 2 and a half hours later of walking down the muddy mountain road in the whipping wind, I was soaked. To the bone. …Even with quality rain gear and a trash bag on my pack.

I’m lost. No, not lost in the mountains, lost on a road, in the middle of somewhere (the middle of nowhere). There are no signs here (of course not), no people, no nothing. I kept walking. Finally I spotted a lady in a house. I asked her if I was walking the right way to Huaraz. She pointed and said yes, and then said something about a faster route and gave me spotty directions for that. A few minutes later I read a sign that said:

Trekking Trail to Huaraz. 5 kilometers. As it was now 5pm, I took the trail. Well, I came to a fork in the road and I went right. I scared some women who were digging potatoes in a field when I announced my presence and asked for help. They laughed, said, “Gringita!” and pointed.

Again, another fork in the trail/cobblestone road, and this time I chose downhill. I ended up in a field and I saw a man far in the distance. I walked towards him. Just as I could start to really see him, I saw him stumble sideways and fall over.

Perfect. He’s drunk. This should be entertaining.

We shook hands, he commented on the ridiculous amount of rain, smiled, pointed to the correct road, and we went on our merry ways. A few steps later I turned around and he was on the ground again. Rough day.

Fast forward —> after many more encounters with people and asking directions, I squish squished past a boulder…a boulder that I recognized! Gary! Thank you for the bouldering circuit tour on my first day in town! I’m close! At 6:30pm, and after walking nearly 10 miles from the entrance to the Quebrada Cojup (should have only been 6 kilometers), I was home.

Maybe I should just stay in the mountains forever.

2 Responses to Snow, Rain, and the Neverending Journey (Day 3)