Up way before the sun and hiking up the rocky path to the Torres Mirador.  Hiking with my headlamp on for an hour reminded me of Shasta ascents and the goodness of mountaineering slogging during the wee hours of the morning. 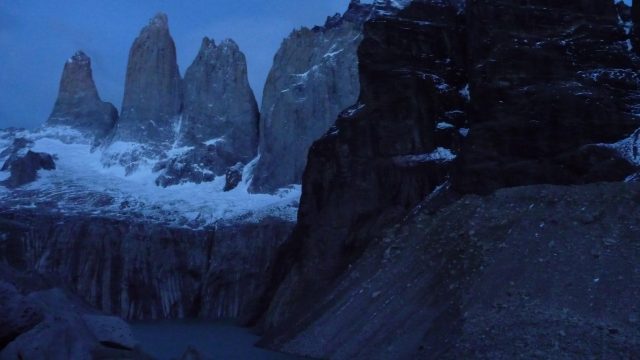 Lucky me, I was one of the first up to the Mirador (and then like 40 other people showed up) as the sun yawned and dawned. 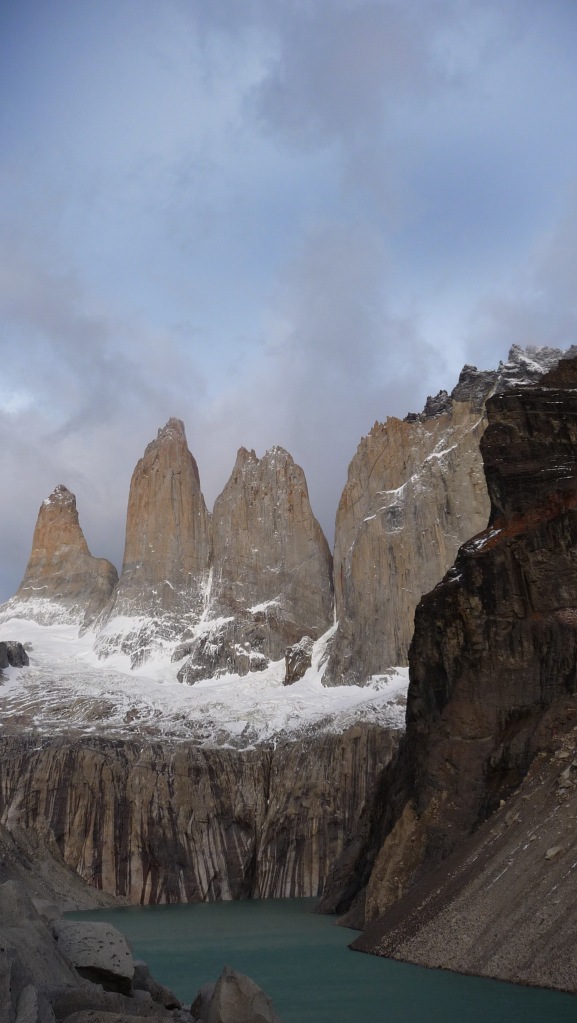 Although the towers didn´t glow golden like all the pictures on the postcards, I was pretty stoked to have a clear view of their glorified granite (it was rainy and clouded over the day before, and apparently didn´t clear up for the next few mornings).

Such a small world.  As I was sitting and “Aw yea-ing” tucked in between some monster boulders, the two people who sat next to me happened to be high school buddies with some of my homies from Davis.  Nor Cal gets around.  Hella.

After the Torres and after my imitation Snickers bar for breakfast (called a “Kick Back” which I dutifully renamed and sloganned “Always time for a Kick It“) I headed up the trail towards the remote climbers basecamp. 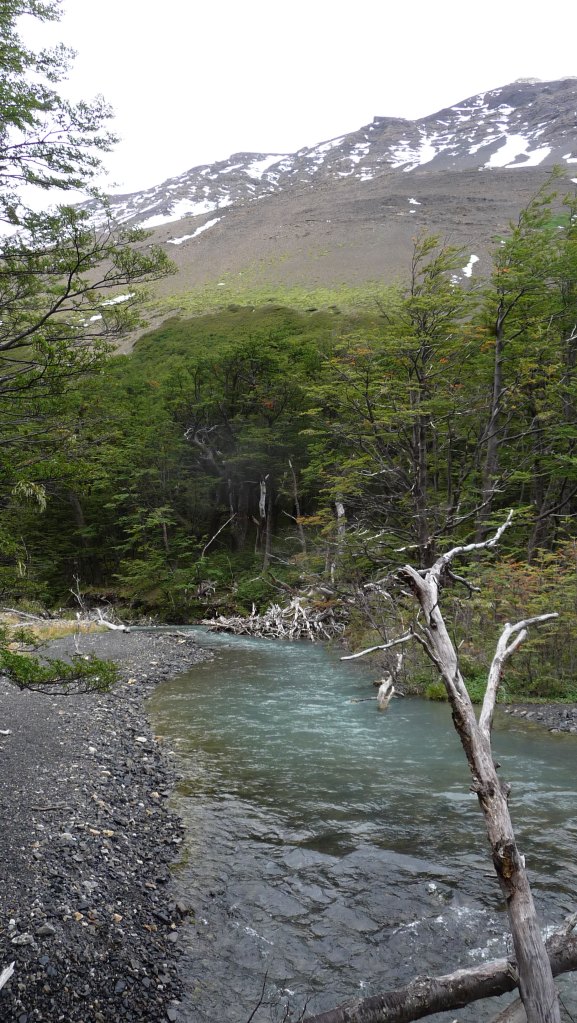 A super tranquil river valley draining straight from the surrounding glaciers.  The color of the water tripped me out.  And again, I was reminded of The Wine Parlor while walking through the brightest array of green foliage. 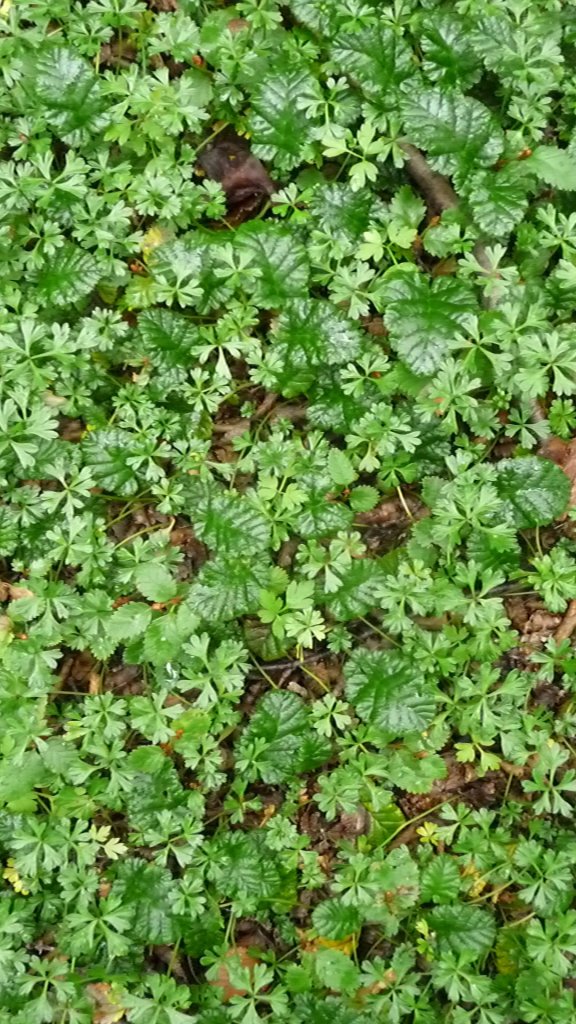 A true climbers camp.  Check out the chopped wooden holds nailed onto the underside of the overhanging-esque tree.  Climbers would need a bouldering problem at camp. 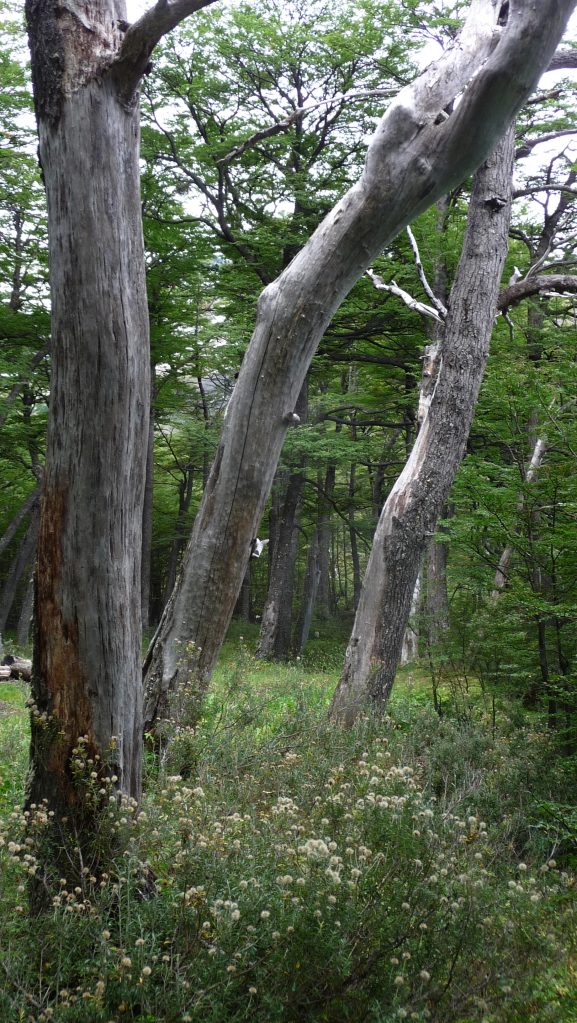 What started out as a pleasant meandering stroll along the river changed when I broke tree line and boulder and rock hopped for a few hours…fighting the wind the entire time.

I disagree with the name Valle Silencio…it should be retitled, Valle Viento (The Valley of Wind).  I almost the wild wind as a sign to call it and turn back, but instead, I walked on, leaning so far forward that I thought I would fall on my face…but the wind held me up and did not let up.

The clouded, close up view of the Torres was cool. 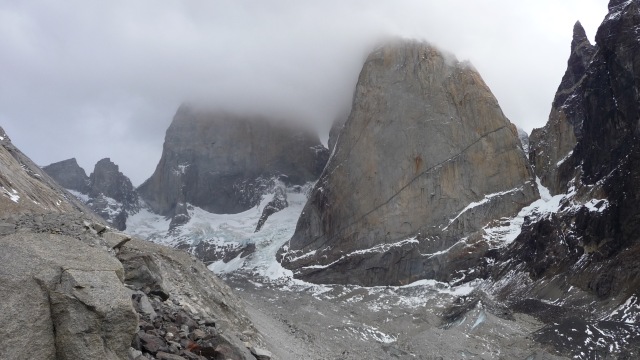 And so was the mountain that I had nearly walked completely around from the Torres Mirador this morning. 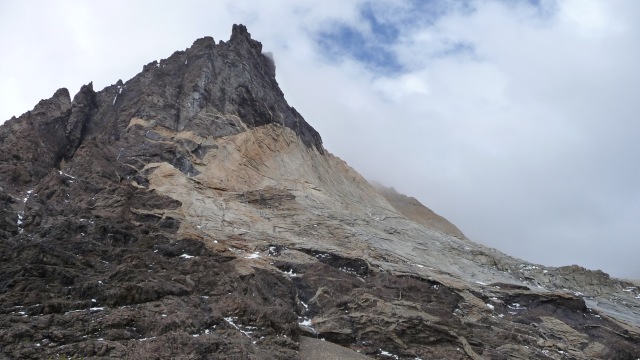 But hands down, the most epic part of the afternoon was the realization I had while chowing on a Kick It, crouched behind a cracked boulder:

Oh WOW, that´s a glacier.  I´ve been walking next to a glacier this entire time and:

Oh HEY little pools of laundry detergent blue! What´s going on!?  A glacier.  Completely camoflauged and covered in gray rocks like the ones on which I was walking here on this morraine.  Who knew. 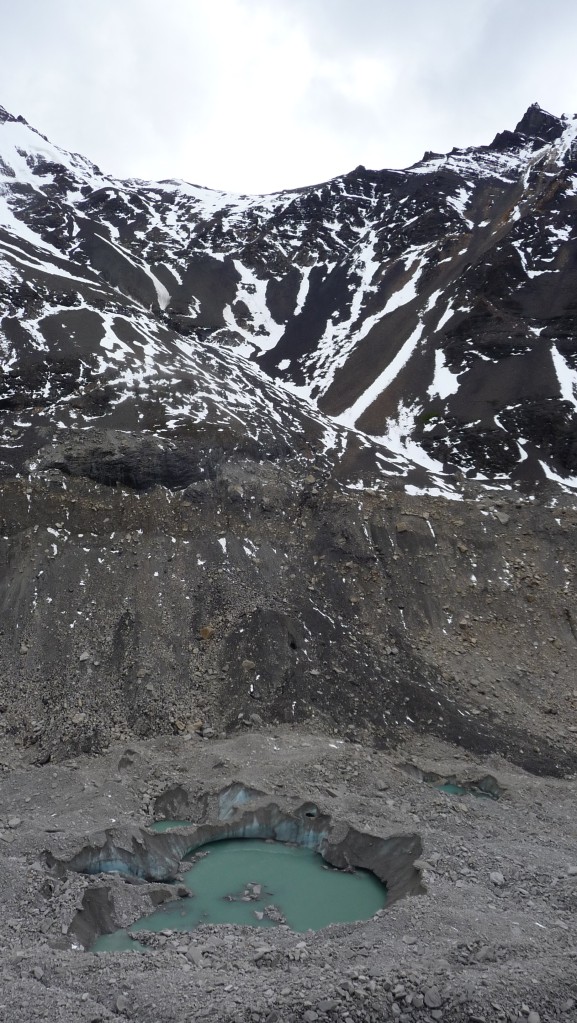 I had hiked for two and a half hours up the morraine past the climber´s camp.  With the wind at my back, I flew, didn´t trip, and made it back to the climbing shack in thirty minutes.

Back to Campamento Torres for dinner at dusk.  I didn´t see a soul all day.  (The wind made up for that by talking to me the entire time I was hiking.)

This entry was posted in South America. Bookmark the permalink.